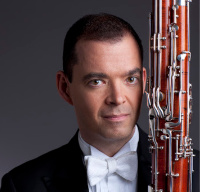 A native of Canton, Ohio, William Buchman studied bassoon performance at the Yale University School of Music with Arthur Weisberg and at the University of Southern California School of Music with Norman Herzberg. Currently on the faculty of the DePaul School of Music, he also coaches the bassoon section of the Civic Orchestra of Chicago and has presented masterclasses and recitals in Florida, Illinois, Indiana, Ohio, Michigan, Minnesota, North Carolina, Texas, Canada, Brazil, China, and Germany.

William Buchman performs in Circles of Friends on May 7 and 8.