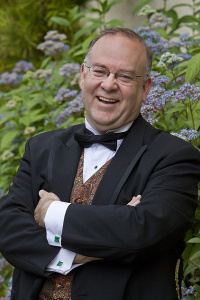 Andrew Megill was named Music of the Baroque's Chorus Director in April 2022. He is recognized as one the leading choral conductors of his generation, admired for both his passionate artistry and his unusually wide-ranging repertoire, which extends from early music to newly composed works. He currently serves as the Suzanne and William Allen Distinguished Professor of Music and Director of Choral Activities at the University of Illinois (Urbana-Champaign). In addition, he leads three of North America’s finest professional vocal ensembles: the Montreal Symphony Orchestra Chorus, the Carmel Bach Festival Chorale, and Fuma Sacra.

Andrew Megill previously served as Music Director of the Masterwork Chorus and Orchestra and Chorusmaster for the Spoleto Festival USA. He has been a guest artist with the Yale Institute of Sacred Music, TENET vocal ensemble, the Juilliard Opera Center, and Emmanuel Music, and served as interim choirmaster for Trinity Church in Manhattan. Prior to his appointment at the University of Illinois, he taught at Westminster Choir College for more than twenty years.