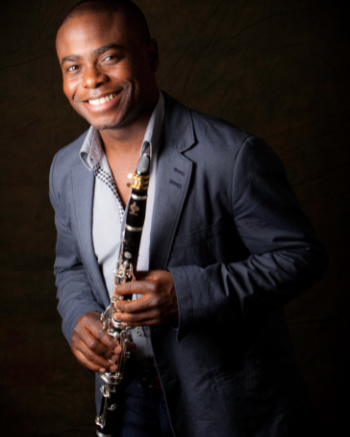 Hailed for his “trademark brilliance, penetrating sound and rich character” (New York Times), clarinetist Anthony McGill is one of classical music’s most recognizable and brilliantly multifaceted figures. In addition to his dynamic international solo and chamber music career, Anthony McGill is principal clarinet of the New York Philharmonic—the first African-American principal player in the organization's history. In 2020, he was awarded the Avery Fisher Prize, one of classical music’s most significant awards given in recognition of soloists who represent the highest level of musical excellence. The performances in February 2022 mark his debut with Music of the Baroque.

Anthony McGill regularly appears as a soloist with top orchestras, including the New York Philharmonic, Metropolitan Opera, Baltimore Symphony Orchestra, and Kansas City Symphony. He performed alongside Itzhak Perlman, Yo-Yo Ma, and Gabriela Montero at the inauguration of President Barack Obama, premiering a piece by John Williams. As a chamber musician, McGill is a favorite collaborator of the Brentano, Daedalus, Guarneri, JACK, Miró, Pacifica, Shanghai, Takács, and Tokyo quartets, as well as with Emanuel Ax, Inon Barnatan, Gloria Chien, Yefim Bronfman, Gil Shaham, Midori, Mitsuko Uchida, and Lang Lang. . He has toured with Musicians from Marlboro and regularly performs for the Chamber Music Society of Lincoln Center and the Philadelphia Chamber Music Society. Festival appearances include Tanglewood, Marlboro, Mainly Mozart, and Skaneateles, and the Music@Menlo, Santa Fe, and Seattle Chamber Music Festivals.

A graduate of the Curtis Institute of Music, Anthony McGill previously served as the principal clarinet of the Metropolitan Opera and associate principal clarinet of the Cincinnati Symphony Orchestra. In demand as a teacher, he serves on the faculty of The Juilliard School, Curtis Institute of Music, and Bard College Conservatory of Music. In the fall of 2020, he was named Artist-in-Residence at the Cali School of Music at Montclair State University.

Anthony McGill performs in McGill Plays Mozart on February 27 and 28.