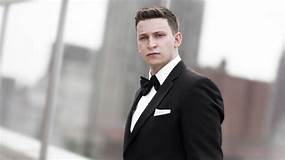 Acclaimed as a “young star” and “complete artist” by The New York Times and "extravagantly gifted... poised to redefine what’s possible for singers of this distinctive voice type” by the San Francisco Chronicle, 27-year-old American countertenor Aryeh Nussbaum Cohen is one of the classical vocal world's most promising rising stars. He makes his Music of the Baroque debut as Hamor in Jephtha on September 18 and 19.

In the 2021-22 season, he makes his Metropolitan Opera debut as Rosencrantz in the Met and U.S. premiere of Brett Dean's Hamlet in the Neil Armfield production conducted by Nicholas Carter. He makes his Opernhaus Zürich debut in a world premiere ballet creation choreographed by Christian Spuck upon the music of Monteverdi's Madrigals, conducted by Riccardo Minasi. On the concert stage, he makes his Russian and role debuts in the title role of Handel's Giulio Cesare in Egitto with the Moscow Chamber Orchestra led by Christopher Moulds, he debuts at Amsterdam's Concertgebouw in his role debut as Prince Go-Go in Ligeti's Le Grand Macabre with the Dutch Radio Filharmonisch Orkest led by James Gaffigan, and he returns to The Dallas Opera in a series of gala concerts led by Emmanuel Villaume. He returns to Philharmonia Baroque Orchestra for a concert-lecture on the history of Jewish cantorial music, and he returns to Ars Lyrica Houston in a program of Bach and Handel.

Highlights of recent seasons include role debuts as Oberon in A Midsummer Night’s Dream at the Adelaide Festival in the acclaimed Neil Armfield production conducted by Paul Kildea, as David in Barrie Kosky’s heralded production of Handel’s Saul at Houston Grand Opera conducted by Patrick Summers, as Medoro in Handel's Orlando at San Francisco Opera under the baton of Christopher Moulds, and as Ottone in Handel's Agrippina in staged performances with Ars Lyrica Houston conducted by Matthew Dirst. Aryeh made his European debut at the Theater an der Wien singing Timante in Gluck's Demofonte with Baroque ensemble Il Complesso Barocco, under the baton of Alan Curtis.

On the concert stage, he has given performances of Bernstein’s Chichester Psalms with the Buffalo Philharmonic, Handel’s Saul with Nicholas McGegan and the Philharmonia Baroque Orchestra (professionally recorded and available on all leading streaming platforms), Bach’s Christmas Oratorio with Matthew Dirst and the Portland Baroque Orchestra, and Handel’s Messiah with the San Francisco Symphony and Saint Paul Chamber Orchestra. He made his Australian recital debut under the auspices of the Adelaide Festival accompanied by pianist Konstantin Shamray, he bowed in a world premiere by Yuri Possokhov with the San Francisco Ballet, and he recorded a program of Gluck, Handel, and Vivaldi for his first solo album with Jeffrey Thomas and American Bach Soloists.