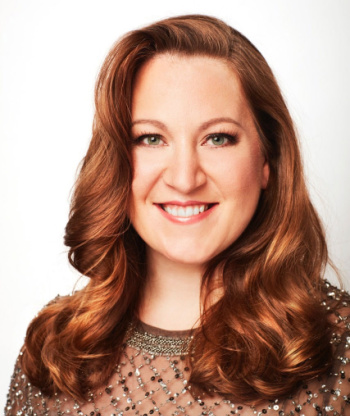 Mezzo-soprano Clara Osowski, who sings “from inside the music with unaffected purity and sincerity” (UK Telegraph), is an active soloist and chamber musician throughout the United States and Europe.  Recognized for her excellence in Minnesota, Clara was a recipient of the prestigious 2018-2019 McKnight Artist Fellowships for Musicians administered by MacPhail Center for Music. She makes her Music of the Baroque debut on September 18 and 19 as Storge in Jephtha.

Upcoming engagements in the 2021/2022 season include the Bach Magnificat and Cantatas with Handel & Haydn Society in Boston, Handel’s Messiah for her debut with the Kansas City Symphony, Beethoven Symphony No. 9 with the Milwaukee Symphony and her London debut at Wigmore Hall.

In the 2020/2021 season she debuted with the Minnesota Opera as Mrs. Herring in the filmed production of Britten’s Albert Herring, and appeared in recital with Wu Han & Friends for the Schubert Club in St. Paul.

In 2017, Clara Osowski became the first ever American prize winner when she placed second at Thomas Quasthoff’s International Das Lied Competition in Heidelberg, Germany; was a finalist in the Wigmore Hall/Kohn Foundation Song Competition and was awarded the Richard Tauber Prize for the best interpretation of Schubert Lieder; and won the Houston Saengerbund Competition. She won the Radio-Canada People’s Choice Award and third place in the song division at the 2018 Concours Musical International de Montréal. She was a 2012 Metropolitan Opera National Council Upper-Midwest Regional Finalist, the winner of the 2014 Bel Canto Chorus Regional Artists Competition in Milwaukee, and runner-up in the 2016 Schubert Club Bruce P. Carlson Scholarship Competition.

An active educator, Clara Osowski has given masterclasses and convocations at Syracuse University, Muhlenberg College, Seattle University, Concordia College (Moorhead), and North Dakota State University. She was the guest artist in residence at Indiana State University’s 50th Contemporary Music Festival celebrating the music of Libby Larsen and has served on the Aspen Music Festival’s Professional Choral Institute in partnership with Seraphic Fire.

In addition to performing, Clara Osowski serves as the Artistic Director of Source Song Festival, a week-long art song festival in Minneapolis, Minnesota and participates in a number of ensembles, including Lumina Women’s Ensemble and Seraphic Fire.