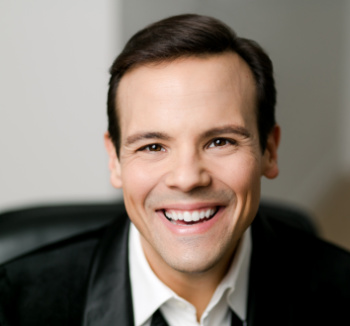 Praised by Opera News for “high notes with ease, singing with a luxuriant warm glow that seduced the ear as he bounded about the stage with abandon,” American tenor David Portillo has established himself as a leading classical singer of his generation. He makes his Music of the Baroque debut as Jephtha on September 18 and 19.

In the 2021-2022 season, David Portillo will perform Lurcanio in Handel’s Ariodante with the Palau des les Arts Reina Sofia in Valencia, Lysander in A Midsummer Night’s Dream with Opéra de Lille, and Tamino in Die Zauberflöte with Pittsburgh Opera. He also appears as recital soloist with pianist Craig Terry at the Terrace Theater in the Kennedy Center for Vocal Arts DC.

Cancellations due to the Covid-19 pandemic included appearances at the Metropolitan Opera as the title role in Roberto Devereux and as Tybalt in Roméo et Juliette, at the Bayerische Staatsoper as Pasquale in Haydn’s Orlando Paladino, Opera Theatre of St. Louis as Mr. Rodriguez in what would have been the world-premiere of Tobias Picker’s Awakenings, and Minnesota Opera as Lensky in Eugene Onegin. In concert, he had been scheduled to perform with the Indianpolis Symphony Orchestra, Kansas City Symphony, and with the St. Paul Chamber Orchestra.

In the 2020-2021 season, Mr. Portillo performed the title role in a filmed version of Albert Herring with Minnesota Opera, originated the role of Jonathan Harker in the world premiere of John Corigliano and Marc Adamo’s Lord of Cries with Santa Fe Opera, gave a virtual recital for Valhalla Media Live with pianist Yasuko Oura, and was the tenor soloist in Bach’s B Minor Mass with the Orchestre Métropolitain in Montreal, conducted by Yannick Nézet-Séguin. In the 2019-2020 season, he returned to the Metropolitan Opera for his role debut as Steuermann in a new production of Der fliegende Holländer, conducted by Valery Gergiev, and as Tamino in the English-language version of The Magic Flute, a role he then reprised with Washington National Opera.

With orchestra, David Portillo has appeared as the tenor soloist in Verdi’s Requiem and Beethoven’s Symphony No. 9 with the Phoenix Symphony and Colorado Music Festival, and Haydn’s Creation with the Colorado Music Festival. He has performed as soloist in Handel’s Messiah with the St. Paul Chamber Orchestra, Kansas City Symphony, and Richmond Symphony. He has performed as the tenor soloist in Schumann’s Das Paradies und die Peri with the Netherlands Radio Orchestra. With Washington Concert Opera, he has performed Tebaldo in concert performances
of I Capuleti e i Montecchi.