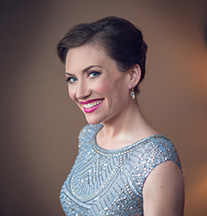 American soprano Heidi Stober’s recent and upcoming performances include Norina in Laurent Pelly’s production of Don Pasquale at San Francisco Opera; Ricky Ian Gordon’s 27 with the Collegiate Chorale at New York’s City Center; Marguerite in Faust at Deutsche Opera Berlin as well as further performances with the company as Oscar, Gretel, and Pamina; and her United Kingdom and role debut singing the title role of Handel’s Semele with Garsington Opera. On the concert stage, she sings Brahms’ Ein Deutsches Requiem with the Tucson Symphony Orchestra and performs a solo recital with Tucson Desert Song. She last appeared with Music of the Baroque in February 2018.

Previous performances include her debut with Lyric Opera of Chicago as Valencienne in The Merry Widow; a role debut of Johanna in Sondheim’s Sweeney Todd at San Francisco Opera; a return to Houston Grand Opera for Susannah in Le nozze di Figaro; her company and role debut at Dresden Semperoper singing the title role in Handel’s Alcina, as well as performances of Micaëla in Carmen; and performances of Pamina, Adina, and Micaëla with Deutsche Oper Berlin. Concert appearances included her debut with the New York Philharmonic as the soloist in Handel’s Messiah conducted by Jane Glover, and a joint recital with her husband, baritone Simon Pauly, in Berlin.

Heidi Stober made her debut at the Metropolitan Opera during the 2011-2012 season as Gretel in Hansel and Gretel conducted by Robin Ticciati, returning to the company as Pamina in The Magic Flute. In 2010, she debuted with the San Francisco Opera to great critical acclaim as Sophie in Werther, which was followed by performances of Susanna in Le nozze di Figaro, Atalanta in Xerxes, Nannetta in Falstaff, Magnolia in Showboat, and Pamina in a new production of Die Zauberflöte. Highlights of concert engagements include Mozart’s Requiem with the Los Angeles Philharmonic, Mahler’s Symphony No. 4 with the Milwaukee Symphony Orchestra, and the role of Anne Trulove in The Rake’s Progress with the St. Paul Chamber Orchestra. Additional concert work includes soprano soloist in concert performances of Barber’s Knoxville: Summer of 1915 with the Oslo Philharmonic, Beethoven’s Symphony No. 9 with the Baltimore Symphony Orchestra, Brahms’ Ein Deutsches Requiem with the Houston Symphony, Handel’s Messiah with the Hong Kong Philharmonic, Carmina Burana with Houston Ballet, and Mahler’s 4th Symphony with Rundfunk-Sinfonieorchester Berlin.


Heidi Stober performs in The Brothers Haydn on May 8 and 9.