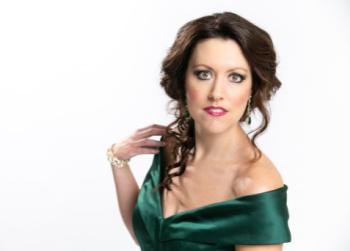 Soprano Katelyn Leeis a member of the Music of the Baroque Chorus and a teaching artist with the “Strong Voices” arts education program. She also performs regularly with companies such as Lyric Opera of Chicago, Haymarket Opera Company, Opera Theatre of Saint. Louis, and Chicago Opera Theater. She last appeared as soloist with Music of the Baroque in September 2021.

Recent opera and musical theater roles include Gretel in Hansel and Gretel; Romilda in Serse; Rosina in _The Barber of Seville; Doris Parker in Charlie Parker's Yardbird; Antonia in Man of La Mancha; Mizzi in the American premiere of The Ball at the Savoy; Cunegonde in Candide; Madame Goldentrill in The Impresario; Zerlina in Don Giovanni; and the Female Narrator in the world premiere of Jason and the Argonauts.

Katelyn Lee received degrees from the University of Cincinnati College-Conservatory of Music and the Indiana University Jacobs School of Music. She has also studied with renowned teachers Barbara Clark, Costanza Cuccaro, and Theresa Brancaccio.