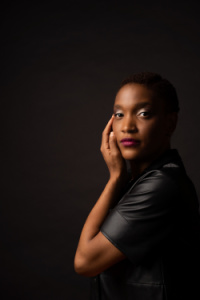 A Chicago native, Kia Smith trained intensely on scholarship at The Hyde Park School of Dance, The Joel Hall Dance Center, ETA Creative Arts Foundation, StoryCatchers Theatre, and received scholarships to attend the American Dance Festival in 2008 and 2009. She holds a BFA in Dance from Western Michigan University and an MFA from the University of Wisconsin-Milwaukee where she was an Advanced Opportunity Program Fellow. During her tenure at the University of Wisconsin-Milwaukee, Kia authored The Embodiment of Memory in the Age of an Obtrusive Quiet: An Autoethnography and produced a corresponding seventy-five-minute evening-length work in conjunction with the Rebuild Foundation and Chicago’s Stony Island Arts Bank.

As a recipient of the City of Chicago’s Department of Cultural Affairs and Special Events Individual Artist Grant Kia worked as a cultural ambassador for the city at Impulstanz Dance Festival in Vienna, Austria in the summer of 2016. Her work has been featured in Dance Magazine, the Chicago Tribune, the Hyde Park Herald, the Daily Jefferson County Union, the Chicago Sun Times, Chicago Magazine, See Chicago Dance, Chicagolandmusicaltheatre.com, New City Magazine, Dancermusic.com, and the Parisian online publication touslesfestivals.com. She is a member of the International Association of Blacks in Dance where she received the Joan Myers Brown Artist Development Fund scholarship and was a 2018 invited panelist for “Women of Color Arts Leaders”.

Kia is the Founder and Executive Artistic Director of the South Chicago Dance Theatre, the company’s Resident Choreographer and the founder of its signature programs South Chicago Dance Festival, the Choreographic Diplomacy Program, Choreographic Fellowship and Arts Administration Fellowship. In 2018, she received the inaugural Young and Ambitious Entrepreneurship Award from the Metropolitan Board of the Chicago Urban League and was chosen by the New York City based Stage Director’s and Choreographers Foundation as a member of the national Observership class. In 2021, Kia received a 3Arts Make A Wave award and was an Ann & Weston Hicks Choreographic Fellow at the renowned Jacobs Pillow. She is 2022 Chicago Dancemakers Forum Lab Artist Awardee and a participant in the Artist in Residence AIR Program at the Cliff Dwellers Chicago. As a freelance choreographer, Kia’s recent and upcoming commissions include Madison Ballet (2021), Chicago Repertory Ballet (2022), the Institute For Contemporary Dance at Houston Contemporary Dance Company (2022), Houston Contemporary Dance Company (2022), Chicago Opera Theater (2022), Ruth Page Civic Ballet Training Company (2022), University of Wisconsin-Milwaukee (2022), Giordano Dance Chicago (2023), Western Michigan University (2023) and a new evening length work Memoirs of Jazz in the Alley for South Chicago Dance Theatre premiering at the Auditorium Theater of Chicago.