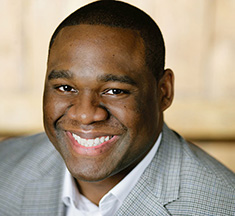 American bass-baritone Michael Sumuel’s recent performances include a return to San Francisco Opera to perform the title role in a new production of Le nozze di Figaro and the role of Escamillo in Carmen with Norwegian National Opera and Ballet. He will also return to the Cleveland Orchestra as soloist in Mozart's Mass in C Minor, to the Los Angeles Philharmonic for Beethoven's Symphony No. 9, and to the Grant Park Music Festival for Beethoven's Missa solemnis. He last appeared with Music of the Baroque in March 2018.

Recent opera highlights include the role of Marcello in La bohème with Houston Grand Opera, Alidoro in La Cenerentola with Norwegian National Opera and Ballet, Sharpless in Madama Butterfly with the Glyndebourne Festival Opera, and his debut at Teatro Massimo di Palermo performing Theseus in Britten's A Midsummer Night's Dream.

Michael Sumuel's recent concert stage highlights include Haydn’s Theresienmesse with the Grant Park Music Festival, Beethoven’s Symphony No. 9 with the Oklahoma City Philharmonic, and Puccini’s Messa di Gloria with the San Diego Symphony. He also joined the Phoenix Symphony for performances of Messiah, Mercury Houston for Bach’s Magnificat and St. Matthew Passion, and made his debut at the BBC Proms singing Kate Whitley’s “I am I say” with the Multi-Story Orchestra at Eastgate Centre Rooftop Car Park.

Additional concert highlights include Mozart’s Mass in C Minor with the Orchestra of St. Luke’s, conducted by Pablo Heras-Casado at Carnegie Hall, Beethoven’s Symphony No. 9 with Seattle Symphony, and Handel’s Messiah with the New Jersey Symphony Orchestra.