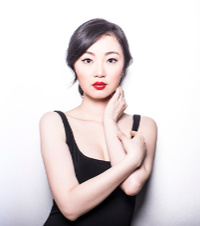 Soprano Ying Fang’s 2019-20 season included her debut with Lyric Opera of Chicago as Zerlina in Mozart's Don Giovanni and a return to the Metropolitan Opera for her role debut as Sophie in Massenet's Werther and as Pamina in Julie Taymor's production of Die Zauberflöte. She will also perform the role of Susanna in Mozart's Le nozze di Figaro with the Los Angeles Opera. She also appeared at the Tsinandali Festival in Georgia for Mahler's Symphony No. 2 and gave song recitals for the Philadelphia Chamber Music Society, Celebrity Series of Boston, and Parlance Chamber Concerts. She last appeared with Music of the Baroque in May 2017.

Other recent highlights include Ying Fang's debut at the Salzburger Festspiele in a new production of Idomeneo directed by Peter Sellars as well as her role debut as Servilia in La clemenza di Tito at the Metropolitan Opera. She also joined the Los Angeles Philharmonic at Walt Disney Hall as Juno in Sibelius' The Tempest in collaboration with The Old Globe Theatre of San Diego. Recent orchestra debuts include with the Cleveland Orchestra for Ariadne auf Naxos, the Boston Symphony Orchestra and Hong Kong Philharmonic for Mahler's Symphony No. 2, the San Francisco and Houston symphonies for Handel's Messiah, and the Malaysian Philharmonic and North Carolina Symphony for Carmina Burana.

Ying Fang performs in The Creation on September 13 and 14.