Kraemer, Music of the Baroque showcase invention in varied program 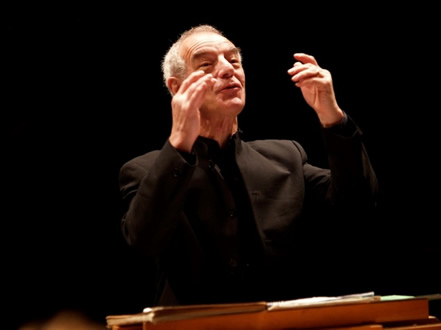 The prolificacy and consistency with which the Baroque masters churned out well-crafted works ensures that it is always possible to construct a full program out of rarely played, but nonetheless satisfying works by Bach, Handel, Telemann, Vivaldi, and Purcell.

On Monday evening, Music of the Baroque played just such a program—titled “Baroque Invention”—at the Harris Theater, conducted by Nicholas Kraemer, who led many of the pieces from the harpsichord.

Purcell’s Chacony in G minor is often treated as a weighty, emotionally wrenching affair, as if looking forward to Bach’s celebrated Chaconne in D minor for violin. Kraemer and the orchestra eschewed this approach, honoring the chaconne’s origins as a dance, by taking a very swift basic tempo, and playing with sprightly rhythms and clipped phrasing, even to the point of cutting notes short to create air between them. Balances were carefully judged to highlight specific lines at different junctures in the piece.

The finest performance of the first half was of Telemann’s Ouverture à 7 in C. The attention to characterization that they would employ throughout this performance was noticeable from the very outset of the first movement in which the violins played their upward scale figures as if they were firing them like arrows off the strings, which contrasted nicely with the impassive melody in the woodwinds.

Particularly excellent were the interpretations of the “Harlequinade” (all of its playful syncopations well emphasized) and “Bourrée en Trompette.” Here oboists Robert Morgan, Peggy Michel and Erica Anderson did an admirable job of executing the rapid changes in tone between lyrical and frolicsome passages and the moments when they had to imitate trumpets. The “Sommeille” movement was not on the same level, displaying some ensemble coordination issues.

The second half opened with a springy and vigorous performance of Vivaldi’s Concerto “per l’orchestra di Dresda”, a concerto grosso in everything but name. In the violin-bassoon duet passage, concertmaster Robert Waters phrased his solo part with much tenderness.

The largest dramatic range of the evening came in the piece for the smallest instrumental forces: Purcell’s Sonata No. 6 in G minor, Z. 807, in which Waters and principal second violinist Sharon Polifrone played the solo parts, over a continuo played by Kraemer and cellist Judy Stone. The piece is a series of mostly imitative variations over a ground bass. Waters and Polifrone gave each successive variation a unique character, and they mimicked each other’s phrasing with precision and energy.

Less successful was Handel’s Concerto Grosso in B-Flat, Op. 3 No. 1, which opened the program. Smaller forces such as this can easily make up for what they lose in power by playing with chamber-music-like focus and transparency. However, here the performances suffered from a small dynamic range and rather listless music-making in the outer Allegro movements. There was some difficulty staying together during the dovetailing of the various concertino parts that opens the central Largo movement. But once the central exchange between concertmaster Robert Waters and principal oboist Robert Morgan commenced, the second movement began to take shape.

The concert closed with a performance of Bach’s Suite No. 1 in C major, BWV 1066. As Kraemer noted in his spoken remarks about the piece: aside from the brass imitations in the strings in the second section of the Gavotte (which Kraemer and the orchestra rendered with appropriate pomp), the Suite presents few surprising quirks along the lines of the rhythmic surprises in the Telemann. Instead, suggested Kraemer, the piece succeeds on the basis of the immaculate craftsmanship in the way all the different parts fit together.

With these criteria in mind, their performance of this piece was a success: each line was well shaped unto itself and balanced well against the others, granting the rendition both clarity and liveliness.