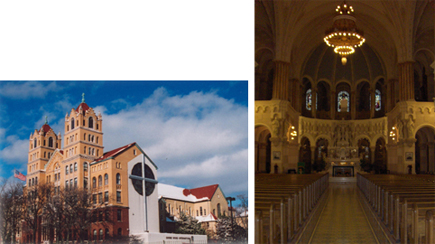 Home to Music of the Baroque’s Holiday Brass and Choral Concerts in the north suburbs, Divine Word Chapel is a consistent audience favorite. With a particularly lush acoustic and extraordinary painted decoration, this venue offers a perfect setting for sixteenth- and seventeenth-century music. It seats about 630.

Divine Word Chapel is somewhat modern in its simplified Neo-Gothic design. It is the predominant building of a surprising prairie seminary established in the 1920s by the Society of the Divine Word. Much of the interior ornamentation, including the massive seven-sided chandelier symbolizing Christ’s seven gifts, the ornate grillwork framing the sanctuary, many wall sconces, the trompe l’oeil walls simulating marble, and the beautifully detailed ceiling, was crafted by the skilled brothers of the order. Fifteen side altars, on two levels behind the main altar, reflect its seminary role.

Large stained glass windows by Franz Zettler of Munich depict Christ commissioning His apostles high in the north transept and the Pentecost in the south transept. A smaller window portrays Arnold Janssen, founder of the society. Statues of the twelve apostles standing on the columns facing the nave lead the eye to the sanctuary, where the mosaic floor shows the earth surmounted by a cross.