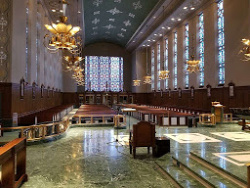 Built for the ages, the American Colonial-style church was designed by Edward J. Schulte of Cincinnati before the Second Vatican Council and dedicated on August 1, 1962. Fernando Germani paused in his New York City Bach series to play the official dedicatory recital May 21, 1963 on the new Casavant organ of the Church. The exterior's brick and Indiana limestone has a free-standing bell tower 178 feet high. The church has a capacity of 1,000.

The grand interior includes a main altar of onyx marble, a choir screen flanked with the 12 apostles in burnished gold and a 14-foot mahogany crucifix above. The abstracted stained-glass windows designed in Germany evoke the walls of heaven described in the Book of Revelation as "adorned with every jewel". The stained-glass windows, described as a “sermon in color and light,” are of imported, antique, hand-blown glass fashioned by the T.C. Esser Studios in Wisconsin.