From the Northwest suburbs:

* Because on-street parking is extremely limited, public transportation is strongly encouraged. Taxicabs are available at the close of the concert.

Nearby Restaurants That Offer Valet Parking: 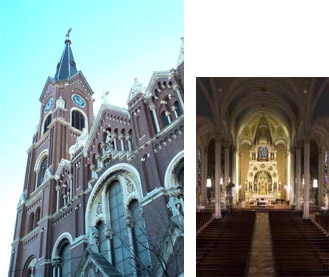 About St. Michael in Old Town

St. Michael in Old Town is the only city venue for the traditional Holiday Brass and Choral Concert. This neighborhood church in Chicago’s Old Town is an ideal setting for the concert because of its spacious sanctuary and outstanding acoustics. St. Michael’s seats more than 1,000.

St. Michael in Old Town was built in 1869 by the Redemptorist Fathers for the German community in Chicago’s Old Town neighborhood. Architect August Wallbaum designed the church, which was built on land donated to the parish by Michael Diversey, namesake of Diversey Avenue and owner of the Diversey beer brewery. Until 1885, St. Mike's, as it is affectionately known, was the tallest building in Chicago.

When the 1871 Great Chicago Fire threatened the building, some of the church treasures and many volumes from its library were buried beneath the ground. Other items, including the hand-carved stations of the cross, were gathered into a wagon and taken north, away from the threat of fire. Most of the structure, including the bell tower’s huge bronze bells, was destroyed in the fire; however, the solid brick and stone walls, and soaring Corinthian columns survived.

Two years earlier the church cost $131,251 to build but, thanks to donated labor, damage was repaired at a cost of only $40,000. St. Mike's was re-dedicated about a year after the Great Fire in October 1871, but it was not until 1876 that the church bells were replaced. It is said that you live in Old Town if you can hear the bells in the church tower.

In September 1902 sixteen leaded and stained windows created by the Mayer Window Art Institute of Munich, Germany were installed. These windows are highly ranked among the examples of German Ecclesiastic art glass existing in this country.