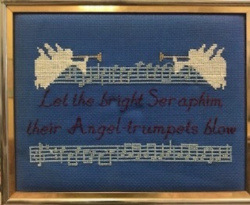 A professional musician now based in upstate New York, Jeanne Coonan has been attending Music of the Baroque concerts since she lived in Chicago for five years in the 1980s.

"Once I discovered Music of the Baroque, I wanted to be at every concert, because the musicianship was always of the highest caliber (and still is now). I became an usher and went to just about every performance, eventually helping then-Concert Manager Janel Dennen with concert set-up details and such as needed (skills that transferred quite well as a band director). I can say with certainty that I thoroughly enjoyed every single performance I heard during the five years I was in Chicago. Now as a resident of upstate NY, I am always in Chicago in December for the Midwest Band and Orchestra Clinic, the largest educational gathering of band and orchestra teachers anywhere (over 16,000 attendees each year!). Happily, most years the conference coincides with the MOB Holiday Brass and Choral concerts; I always attend the performance at St. Michael’s in Old Town. And when the dates don't coincide, I come to Chicago early so as not to miss it!

The moment that stands out most in my memory comes from a performance of "Let the Bright Seraphim" from Handel's Samson in 1985, featuring the exceptional musicianship of trumpeter Barbara Butler and soprano Winifred Faix-Brown. This particular aria is actually much more of a virtuoso duet, with the parts constantly exchanging and mirrored between the soprano and the piccolo trumpet. All the phrasing and musical ornamentation (grace notes, etc.) matched perfectly between the two performers; and when the main theme recapitulated, they changed the ornamentation—together. It was amazing."