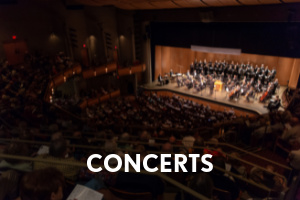 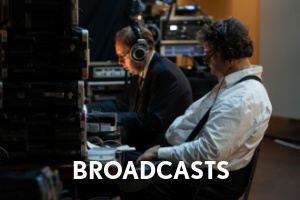 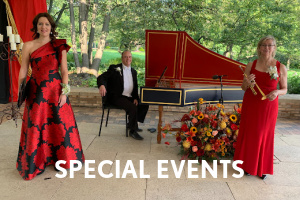 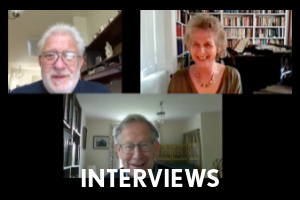 Enhance your enjoyment of Music of the Baroque concerts with "Baroque Notes," our pre-concert lecture series.

Principal Guest Conductor Nicholas Kraemer and program annotator Jennifer More discuss Handel's Messiah in preparation for the ensemble's first performances of the oratorio in over a decade.

Episode 1
Topics covered in Episode 1 include how Nicholas prepares to direct a work he's conducted over 100 times, changes in performance practice over the centuries, and Nicholas's most memorable Messiah experiences.

Episode 2
In Episode 2, Nicholas delves into the significance of Messiah's text sources and how librettist Charles Jennens's choices add nuance to the work's meaning.

Program annotator Jennifer More discusses the program for "Baroque Fireworks," including Handel's Water Music, Concerto a due cori No. 1, and Music for the Royal Fireworks. Composer Stacy Garrop shares the creative process behind Spectacle of Light, specially commissioned for our 50th anniversary.


WFMT Broadcast Series
Music of the Baroque is proud to partner with Chicago's classical music station 98.7/WFMT in our 50th anniversary season. Highlights of the past ten seasons were showcased in a weekly broadcast series on 98.7/WFMT from August to October 2020, and all six programs in our revised season aired 10 days following their original performance date. Links to all available broadcasts on our Soundcloud are listed below.

From virtual gala "Baroque Beautiful," to our special "A Baroque Thanksgiving" concert, to performances by the MOB Chorus and Brass Ensemble, here's where you can find all our special events produced in the 2020-21 season.

May 2021: "What is Continuo?" - An MOB virtual soirée featuring Nicholas Kraemer

Principal Guest Conductor Nicholas Kraemer explains the important role of the continuo group in Baroque music, including how the foundational unit of harpsichord, theorbo, and cello support and drive the ensemble in Baroque performance. Members of the MOB orchestra, directed by Nicholas, perform excerpts from Baroque works by Handel and Bach in this illustrated talk.

An hour-long virtual concert featuring solo and chamber performances by members of our ensemble, including Gina DiBello in an unaccompanied sonata by Bach and Katelyn Lee, Barbara Butler, and Stephen Alltop in Handel's "Let the bright Seraphim" from the oratorio Samson. Executive Director Declan McGovern provides colorful commentary from surprise locations in downtown Chicago. For program information and performer bios, visit baroque.org/thanksgivingprogram.

February 19, 2022: A Conversation with Anthony McGill

New York Philharmonic Principal Clarinet Anthony McGill in conversation with Music Director Dame Jane Glover and Executive Director Declan McGovern. McGill made his Music of the Baroque debut as soloist in Mozart's Clarinet Concerto Feb 27 and Feb 28, 2022. The all-Mozart program also includes the Overture to Lucio Silla, which the composer wrote as a teenager, and the late masterpiece Symphony No. 40 in G Minor. For complete details, visit baroque.org/mcgill.

In the third and final episode of these conversations between Sir Simon Rattle and his good friend Nicholas Kraemer, Sir Simon discusses a particularly memorable performance of Bach’s St. Matthew Passion with the Berlin Philharmonic Orchestra and his wife, Czech mezzo-soprano Magdalena Kožená. Nicholas talks about his audition piece for MOB twenty years ago: Handel’s Dixit Dominus, a work he has performed with the ensemble three times since as principal guest conductor. A memorable family trip to Venezuela rounds off the program and the series.

In the second of three installments, Principal Guest Conductor Nicholas Kraemer and Sir Simon Rattle discuss the influence of period instruments and styles on Baroque performances using modern instruments. Plus, the day that famous Austrian conductor Herbert von Karajan slammed the phone down on Maestro Rattle!

In the first of three installments, Principal Guest Conductor Nicholas Kraemer chats with his old friend Sir Simon Rattle about how they met, their Baroque idols, and more.

The final installment of a three-part interview with Music Director Jane Glover, esteemed conductor and Bach scholar John Eliot Gardiner, and radio personality Carl Grapentine. Topics under discussion this week include why Bach didn't compose operas, why each wrote their respective book, and the surprises about Bach and Handel they uncovered along the way.

Enjoy the second installment of a three-part interview with Music Director Jane Glover, esteemed conductor and Bach scholar John Eliot Gardiner, and radio personality Carl Grapentine. Topics under discussion this week include their favorite works by Bach and Handel, unique insights into the composers' personalities, and much more.

Carl Grapentine interviews the internationally renowned Baroque specialist John Eliot Gardiner about his book on Bach (Music in the Castle of Heaven), and Music Director Jane Glover about her book on Handel (Handel in London).