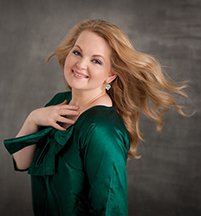 Mezzo-soprano Elizabeth DeShong’s recent and upcoming appearances include returns to the Metropolitan Opera and the Royal Opera for performances as Suzuki in Madama Butterfly; Bradamante in Handel's Alcina with The English Concert; Calbo in Rossini's Maometto II with Washington Concert Opera; and Odoardo Douglas in Mercadante's Il Proscritto with Opera Rara, She last performed with Music of the Baroque in April 2022.

Past performances include the role of Adalgisa in Norma with the North Carolina Opera, a recital for Vocal Arts, D.C., John Adams' The Gospel According to the Other Mary with the Accademia Nazionale di Santa Cecilia, and as soloist in Handel's Messiah with the San Francisco and Houston Symphonies. Additional highlights include her debuts with the Los Angeles Philharmonic as Ariel in Sibelius' The Tempest, the Philadelphia Orchestra in Rossini's Stabat Mater, and a tour of Europe and the United States with The English Concert in which she portrayed both Juno and Ino in Handel's Semele. She also performed the Verdi Requiem with the Minnesota Orchestra, and Sesto in a new production of La clemenza di Tito with the Los Angeles Opera.

On DVD, Elizabeth DeShong can be seen as Hermia in the Metropolitan Opera’s pastiche opera The Enchanted Island (Virgin), and as Maffio Orsini in San Francisco Opera’s production of Lucrezia Borgia on EuroArts Music and Naxos. Her recording of Handel’s Messiah with the Toronto Symphony Orchestra under the direction of Sir Andrew Davis was recently released on Chandos.


Elizabeth DeShong performs in The St. Matthew Passion on April 2 and 3.