He's got a way with words 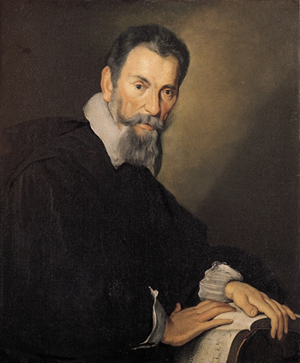 The very first time I heard Monteverdi’s music was in an undergraduate music history survey. I was working on a dual major in English and music, so the coupling of the two in his madrigal settings opened a whole new world. For me, Monteverdi makes poetry spring to life more than any other composer. I loved listening to his madrigals—especially those from Books 4 and 5—repeatedly with the score. And perhaps because I was 18, I delighted in the omnipresent double entendres, especially death as a euphemism for sex. The overall effect was exhilarating.

My favorite madrigal, and the one I always used as an example when I taught music appreciation, is “Si, ch’io vorrei morire”

from Book 5 (1605). If there were any doubt about death’s significance, the text dispels it immediately:

Yes, I would like to die,
now that I'm kissing, sweetheart,
the luscious lips of my darling beloved.

Rather than dwelling on individual words, Monteverdi turns the opening line—“ Sì, ch'io vorrei morire”—into a simple statement, and then gleefully revels in the sentiment of the poetry, the overall experience, for the rest of the piece. The opening line returns at the end—but the sensual excess of the music before it creates almost a Monty Pythonesque air of “wink wink, nudge nudge.”

Composed five years later, the Vespers for the Blessed Virgin is a remarkable sacred piece on a grand scale—as Jane Glover points out, it is the only work of its kind before Bach’s great Passions. Like Bach over a century later, Monteverdi mixes jubilant choral music with intimate, detailed writing inspired both by specific words and the text’s general sentiment. On the face of it, the Vespers could not be more different from a song like the patently secular “Sì, ch'io vorrei morire.” But just as he does in the madrigal, Monteverdi makes the emotions inherent in the words almost palpable. “Duo Seraphim,”

with its text taken mostly from Isaiah 6:3, tells of angels proclaiming the glory of God and the Holy Trinity.

Two seraphim cried to one another:
Holy is the Lord God of Sabaoth.
The whole earth is full of his glory.

The predominant subject matter is simple: “Holy is the Lord God of Sabaoth. The whole earth is full of his glory.” If I were a composer, I might seize upon “glory” and set the text in an extroverted way. But Monteverdi does the opposite.  The music begins slowly, quietly, with two-voiced imitative polyphony that builds to a chain of achingly beautiful suspensions. In the absence of words, it almost sounds like an operatic love duet. Even the more straightforward examples of word painting add to the overall sensual effect. At “Tres sunt qui testimonium” (There are three who give testimony), Monteverdi languidly intertwines a third soloist. And what he does at “tres unum sunt” (3:12 in the video) is genius.

The Monteverdi Vespers is everything at once—it’s prayerful and passionate, grand and intimate, dramatic and restrained. And to understand all the expressive nuances in Monteverdi’s composition, the Vespers must be heard live. Join us on April 1, 2, or 3.