How to Handel your finances 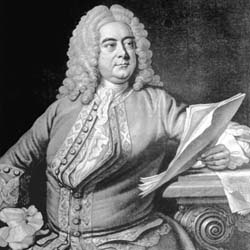 Jane Glover programmed our January concert, “Musical Patrons,” around the relationship that fueled the livelihoods of most Baroque and Classical composers—that between composer and patron. Until the second half of the 18th century, composers were completely reliant on the needs of churches, courts, and wealthy people for their incomes, and many of history’s greatest works came to be not as the result of artistic inspiration, but because of a specific request or need on the part of someone with money. Who can forget the scene in Amadeus in which Mozart, in spite of his terror, is forced to take a commission from a mysterious masked man simply because he had no other choice?

At least one Baroque composer was as nearly as wealthy as his patrons, however. George Frideric Handel amassed a fortune roughly equivalent to £2 million in today’s currency—mostly from playing the London stock market. According to a 2012 article in the Wall Street Journal,

Like many other intellectuals living in London at the time, including Alexander Pope and Isaac Newton, Handel bought into the South Sea Co., the investment that was at the center of one of the world’s earliest and most devastating financial manias. Unlike most of his peers, however, Handel got in early — and got out early as well. According to Harris, he bought no later than 1716, long before the price ran up, and appears to have sold by the middle of 1719, at least one year before the bubble burst. And once Handel got out, he stayed out; he didn’t re-enter the stock market until 1728, long after the mania had faded.

Handel was a savvy financial planner, too. He never spent more than he earned, and apparently later in life shifted his money into annuities that paid a fixed rate of 3-4% interest. And in addition to his musical legacy, he left behind comfortable sums of money for his friends and family. Financial security might not make a good movie, but it’s something to which we can all aspire.

Join us for “Musical Patrons,” featuring a suite from Handel’s Water Music, Bach’s Brandenburg Concerto No. 1, Mozart’s Haffner Symphony, and Haydn’s Farewell Symphony on January 24 and 25.