Parking
Validated weekday evening parking is available at the 900 North Michigan garage for entry after 5:00 p.m. and at the rate of $8. Validation tickets must be picked up from the church reception desk.

We also recommend checking out Spothero for discounted parking. 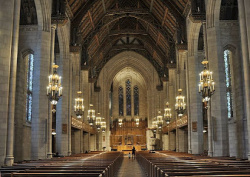 In a nod to Music of the Baroque’s beginnings in a church in Hyde Park, the closing concert of the 2019-20 season will be performed in the sanctuary of Fourth Presbyterian Church, also known as “A Light in the City.” Seating just under 800, the church hosts many arts events throughout the year, including a free weekly Friday Noon Concert Series and occasional evening and weekend performances.

Since 1914, more than 8 million people have entered under the carved stone tympanum over the Michigan Avenue entrance to Fourth Presbyterian Church. Most of the interior and exterior of the church is “original,” looking just as it has for almost a century. The cornerstone was laid in 1912, and the building was dedicated in May 1914. Except for the Old Water Tower, Fourth Presbyterian Church is the oldest building on Michigan Avenue north of the Chicago River.

The architect of Fourth Presbyterian Church was Ralph Adams Cram, America’s leading Gothic revival architect, best known for his work on the world’s largest Gothic cathedral, the Cathedral of St. John the Divine in New York City. Fourth Presbyterian Church is not a “copy” of any one building but instead combines what Mr. Cram saw as the best of English Gothic and French Gothic styles.

Prominent Midwestern architect Howard Van Doren Shaw designed the parish buildings (the Tudor-style structures surrounding the courtyard), which were built at the same time as the church and dedicated in March 1914.