It is 1778 and a bedridden, bankrupt Mozart is carried into the kitchen of 18th-century Black composer Joseph Bologne, known as the Chevalier de Saint-Georges. In spite of obvious differences, these two men forge a friendship navigating a city hostile to outsiders. At the same time, the Chevalier’s weekly music lessons with Queen Marie Antoinette associate him with the monarchy while revolution inflames France. Will he choose loyalty to the crown or violent pursuit of abolition?

Weaving together Bologne’s own music with semi-staged dialogue, The Chevalier ultimately offers a thoughtful meditation on the true nature of equality. 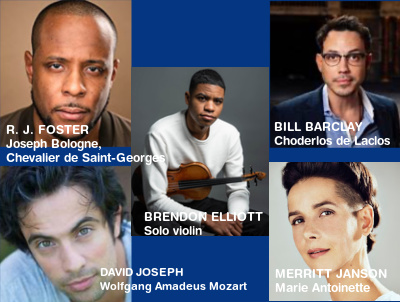 Listen to the music performed in the show

Learn more about The Chevalier here.

The Midwest premiere of this concert theater work written and directed by Bill Barclay took place in partnership with the Kehrein Center for the Arts (Austin), the Chicago Symphony Orchestra Association, the North Shore Center for the Performing Arts in Skokie, and Concert Theatre Works on February 18, 19, and 20.

"The Chevalier" is generously supported by the Zell Family Foundation.