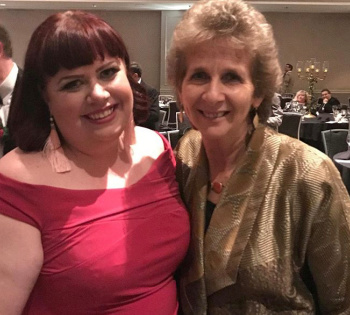 Our Holiday Brass and Choral Concerts are a very special tradition for many MOB musicians and audience members. For over four decades, the holiday program has inspired feelings of joy in countless listeners. But for Anna VanDeKechove, a performance in December 2014 at St. Michael in Old Town went even further—it inspired her to audition to join the MOB Chorus. “This concert was like nothing I'd been to before, though the music was familiar, as were the faces of colleagues in the chorus. Being at that concert is like being enveloped in Christmas Magic. I know how hokey that sounds, but there's not a more accurate description. Now, when I say 'Christmas Magic' I don't mean sparkles, Santa, and glee—I mean the greatest divine gift—the mystery, darkness, waiting, excitement, and sacred splendor of Christmas. By the time the concert was nearly over and the chorus was singing the Te Deum with hand bells, I was fully goose-bumped and thinking 'I MUST audition for MOB and I will find a way to be in this next year.’” (Check out the video below of our chorus performing the Te Deum laudamus.)

Anna has now been a member of the alto section of the Music of the Baroque Chorus since 2015, and MOB is her favorite ensemble as both a listener and a performer. “There is an energy in these concerts onstage as an artist that I don't feel in other organizations. Perhaps because we are a more intimate-sized group, there is a fond connection between chorus, orchestra, conductor, and audience. I feel connected to the familiar faces at the Harris Theater and the North Shore Center—I love seeing people react (while still watching the conductor, I promise)! The magic of performing with MOB is never lost on me.”