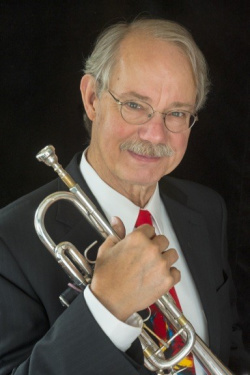 Co-principal trumpet Charlie Geyer first performed with Music of the Baroque in 1975 when Conductor Laureate Thomas Wikman invited him to play principal trumpet for a performance of J.S. Bach's Mass in B Minor—and to put his own section together. The section he put together, which included fellow Chicago Symphony Orchestra trumpet Will Scarlett and his future wife (and co-principal trumpet) Barbara Butler, were then "hired for life," as Wikman put it. But Charlie Geyer's most memorable performance in his 45-year tenure with Music of the Baroque came in February 1979 with Telemann's Day of Judgment, the year after a revelation of his own led him to become a Christian.

Much of the religious works of the Baroque era use the trumpet to heighten the drama of the text – sometimes in celebration, sometimes to convey the wrath of God, and Telemann's Day of Judgment, which dramatizes the story of the Last Judgment of God from the New Testament is no exception. Suddenly, after his conversion, Charlie Geyer was "aware of the text he was performing for the very first time," and that deeper level of understanding and appreciation led to what he called an "astonishing performance" that impacts him to this day.

Listen to an excerpt from the Third Contemplation from our 1992 recording here.

Click here to read the next MOB Story: Anna VanDeKerchove