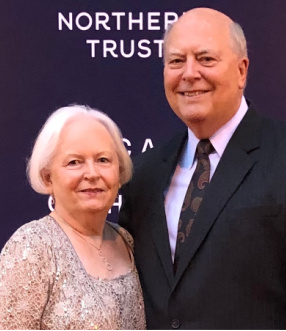 If you've been to a preconcert lecture at the North Shore Center, you may recognize regular attendees Tom and Diane Blake. Tom and Diane joined the MOB audience in the early 2000s. As Tom reminisced, "I had been reading about Thomas Wikman and MOB for several years and, as retirement neared, freeing up time to attend more concerts, we decided to give MOB a try. We quickly became subscribers and have been ever since." While subscribing may have been an easy decision, choosing a top performance is a more difficult task. "It would be impossible to pick a favorite concert," Tom said, "even assuming I could remember some of those we attended. However, the performance of Bach's St. John Passion in March 2018 had a great emotional impact on me. The work was new to me, and the combination of the beauty of the music and the relevance of the text to the Easter season struck a resounding chord (pardon the musical pun). I’m sure Carl Grapentine's pre-concert lecture contributed to my understanding of the piece and honed my emotional sensitivity."

Listen to an excerpt from our March 2018 performance of the St. John Passion